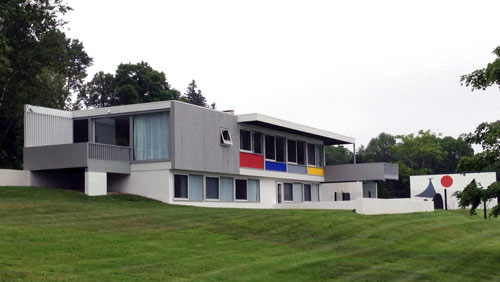 Going Modern in the Country

Asked to picture the architecture of Litchfield County, most people think of traditional, colonial-style New England homes. This classic form for a home has always been revived over the centuries, and it remains the defining style of many of Litchfield’s oldest and most distinguished homes.

Yet there was a time, shortly after WWII, when a different architectural style held sway in Northwest Connecticut — it was modernism. For a few decades, nostalgia for the past was trumped by enthusiasm for the future. The1950s and ‘60s have been called America’s Golden Age of Futurism, when there seemed unlimited potential for gains in science, technology and human achievement.

This was the era Walt Disney formulated his vision for EPCOT (Experimental Prototype Community Of Tomorrow). Finding Futureland was a national obsession. In Litchfield, the future arrived thanks to the efforts of a few young couples wishing to raise their families in a style appropriate to that vision.

American Modernism—particularly in the Northeast—was a direct outcome of the carnage of World War II and the rise of the Nazis. Between Boston and New York, the Northeast saw the growth of an immigrant community of internationally recognized artists and architects pioneering the new style. They gave form to a vision of housing, education and infrastructure for the booming post-war population. Modernism, as a movement, was at its heart a style and an ethos for the growing American middle class and their imagined future.

Much of it began with the arrival of Walter Adolph Georg Gropius (1883 –1969), who, fleeing his native Germany, came to the US on an invitation to direct the Graduate School of Deign at Harvard in 1937. He brought to the GSD the principles of the German Bauhaus, a design school Gropius had founded in 1919 in Dessau, Germany. The guiding principles of the Bauhaus were the synthesis of art and life, work and play. And efficiency and economy of design became the hallmarks of Bauhaus architecture.

For his own family home in Massachusetts, Gropius built a house founded on Bauhaus principles, but already his work had taken a distinctly American turn. Identifying with early American architecture’s material thriftiness and aesthetic simplicity, the Bauhaus design ethic had more in common with the Colonial than one might assume. Today, Gropius House is preserved in its original, fully furnished, condition. It is available for public tours at at 68 Baker Bridge Road, Lincoln, MA (for information call 781-259-8098 or visit www.historicnewengland.org).

The Gropius’ professional and social lives were populated by many of the leading figures in the arts and education. Just as they had in the Bauhaus, they exchanged artwork, furniture and ideas in a rich stream of gifting and collaboration. One of the most important of these friendships was between Gropius and Marcel Breuer. Marcel Lajos Breuer (May 22, 1902 – July 1, 1981) was a Hungarian of Jewish descent. He was first a student, then a teacher at the Bauhaus in the 1920s. Breuer is best known for his early furniture designs using bent steel bar (The Breuer and Wassiliy Chairs), and later for his bold, sculptural buildings, such as the Whitney Museum of American Art in New York City.

Escaping the threat of Nazi occupation in the 1930s, Breuer moved to England, but struggled there to find satisfactory work. Upon the urgings of Walter Gropius and his wife Isa, Breuer followed his friend and mentor to the Northeast in 1937 to teach at the Harvard Graduate School of Design.

At the time Gropius house was built, Breuer had become partners with Gropius in his firm. He was, in fact, one of the primary designers of the Gropius home, but his role was downplayed.

In true Bauhaus fashion, Breuer’s lifetime friendship with a man named Rufus Stillman resulted in the proliferation of his work here in Litchfield. He and his wife commissioned a total of three homes from Breuer for their growing family over the course of his lifetime. Stillman jokingly describes himself as Breuer’s “amateur public relations officer,” and indeed he played an instrumental part in promoting his work (and the work of Breuer’s contemporaries), to friends and public officials throughout the growing town.

Rufus Cole Stillman (1921 – 2009) was a Litchfield native. He graduated from Taft School in Watertown, Connecticut; attended Yale University; and then joined Gen. Patton’s 3rd Army Tank Corps in Europe during World War II. When he returned home after the War – having lost a leg below the knee as the 3rd Army drove toward Berlin – Mr. Stillman settled with his wife, Leslie Caesar Stillman, in Litchfield, Connecticut. As the nephew of Edith Chase (of Litchfield’s Topsmead Estate), and President and Chief Executive Officer of Torrington’s Torin Manufacturing Company, he was a prominent, active local figure. But what he loved most was modern architecture, painting and sculpture.

Stillman said, “Once upon a time an editor asked me what I did, ‘I’m a manufacturer.’ He said, ‘But what do you really do?’ What I really did was fall in love with modern architecture. And with it developed an interest in, no, a passion for, painting and sculpture.”

In 1950, Rufus and Leslie Stillman had visited the Museum of Modern Art. They saw Breuer’s exhibition homes, erected for the public to view in the museum sculpture garden. Public interest in the modernism was high. The Stillmans were among a the growing set of young, middle class families interested in adopting a new way of life, reflecting their present time, and the image of a bright future so alive in the public imagination.

Breuer himself spoke cautiously about the permanence of the radical changes modern architecture offered his clients: “I am particularly interested to see which of these changes are due to moods or fashions and which are due to the developments of a creative and long-term drive behind our work. Is there such a thing as a long-term direction in modern architecture? I believe there is … with allowances for our errors and for our desperate doubts about progress. Still, I believe in progress.

The first house for Rufus and Leslie Stillman, completed in 1951, is known today as Stillman House I (it is privately owned and not available for public viewing). The small, flat-roofed house with vertical siding is a far cry from its 18th and 19th century neighbors. And it remains still strikingly modern 62 years later. The entire home (pictured here) is just under 2000 square feet, built into a slope overlooking fields and woodland at the end of a small street in the town of Litchfield.

Perhaps to placate the neighbors and maintain their privacy, the side of Stillman I facing the street is a demure one-story structure, with narrow horizontal windows. This all changes on the opposite side of the house facing the woodland, where two stories of large plate glass windows, cantilevered porches and panels of siding painted primary colors appear. Here, the pool is located, connected to the balcony above by a stairway which lands on the pool’s diving platform. The pool is bookended by a large, colorful mural wall, painted by Alexander Calder. Calder was a friend to Breuer and the Stillmans, and lived in neighboring Roxbury.

Breuer’s work for the Stillmans rapidly led to additional design work for Breuer in Litchfield County. It also led to a deep and abiding friendship between the designer/architect and his patron. Indeed, the Stillmans and Breuers vacationed together.

Modern homes today are the shell for what was a total lifestyle. The modernist version of domesticity redefined the organization of space and materials, emphasizing light and air, simplicity and efficiency. It also generated a close community of like-minded people. The modern homes of Litchfield were decorated with Alexander Calder’s murals, paintings and sculptures, and were furnished with the chairs, tables and textiles of major modern designers such as Aero Saarenin and the Eamses. It was a life rich with friendships between artists, architects, designers, and their clients.

A revival of interest in Modernism is growing in Litchfield today. Several individuals have purchased, and privately funded, restorations of these Modern masterpieces. Ken Sena describes how he and his partner stumbled into ownership of the Stillman I. Not suprisingly, it was through their friendship with the aging Rufus Stillman: “We had no burning desire to live in a modern home. However, our first home in Litchfield actually happened to be one designed by Breuer, built by Rufus Stillman… Through spending time with Rufus, we developed a great admiration for him, the houses, and all the other work in the community he had done.  When Rufus passed in 2009, we received a call from his daughter asking us if we could help them find a buyer for the house. Almost out of a protective instinct, we decided to buy it.  In the end, and maybe not unexpectedly, we have never not felt Rufus’ presence at the house — his or Breuer’s, I suppose.”

Breuer was far from alone in designing mid-century homes and buildings in Litchfield County. Thanks to Stillman’s tireless support and promotion among close friends and relatives, ten modernist houses were built in the area by the end of the 1950s, and another five by 1975.  They were designed by Breuer, Richard Neutra, John Johansen, Eliot Noyes, Edward Durell Stone, and Edward Larrabee Barnes.

In 1966, Eliot Noyes, Breuer’s former student (and, earlier, a partner in his firm), designed an addition to the Oliver-Wolcott Library. Adding a steel and glass addition to the back of the eighteenth-century Elijah Wadsworth residence was a radical choice for this conservative town. Yet Litchfield’s library remains a vital gathering place and well-loved resource for the town today. The airy, light-filled space plays no small part in the library’s popularity.

As Litchfield’s architectural historian Rachel Carley cautions, the champions of modernism in Litchfield should not be misunderstood, “as provocateurs or as instigators of an organized effort to reinvent their town… What did account for such enlightened planning? Ultimately, the answer lay in a commitment to good, meaningful design.”  The library, occupying the center of town, with it’s elegant combination of styles spanning several centuries, embodies the modernist sensitivity to the past and future, combined in the present moment. In the words of Rufus Stillman it was simply that, “we knew we had to build in our own time.”

Jessica Jane Perkel holds a Masters degree in Architecture from Yale University.  She works as Director of Exhibits at Cornwall Bridge Gallery in Cornwall, CT.  She also writes and makes art (visit her at www.jessjaner.tumblr.com).

Many thanks to N. Silberblatt and N. Worden for their editorial support.